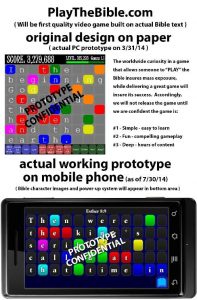 I’m Troy, one of many team members working for RD Games. Prior to Play The Bible, I was fortunate to work on and distribute numerous faith-based games for the PC which also included Bible verses. One was a match-three game, another was a word game, another a karaoke game, even a scripture chess game. We also did other interactive Bible games for youth that became popular among Christian circles. The most well-known was based upon a popular Christian novel series.

Throughout it all, the life-changing impact of these games never seemed to occur from experiencing their entertainment. Instead, the links to our online website with evangelism content, from within the game, is what gave people a chance to Know God and encourage visitors to play to come to faith or recommit to God: https://www.dontbeleftbehind.org/knowing-god/

With mobile games being fairly new in the world, less than a decade, I thought it was time to Tui create a faith-based mobile game for Android and iOS devices that have more than just graphics, but also something unique – Bible verses. My concern was that I didn’t just want to create another game with lots of Bible trivia quiz for kids that’s also filled with entertainment that would link to life-changing content. So, rather than try and out-do the supernatural impacting words of the Bible, I thought, how can we create a game that “is” the Bible? 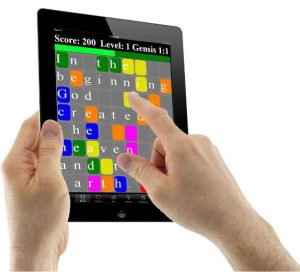 As I thought on it for many days, it got to the point where the concept of making a game that featured the “actual text” of the Bible, without changing the static-text itself, seemed completely ridiculous. Think about it. The text must be in the face of every player, without changing, so the life-changing impact of each Bible verse would not be modified in any way – seems like an impossible task, doesn’t it? Creating this interactive Bible games for youth seemed like a daunting task, but with the Spirit of the Lord guiding us we were able to put the pieces together efficiently.

Many ideas came to mind that were interesting to consider, but in the end, they were ineffective as a fun, healthy and addicting experience for gamers. And then, after several days of prayer, I feel the Lord answered. I remember exactly where I was when the primary game elements came to mind – concepts that would be fun and interesting. And within a month, a prototype Bible verses game was up-and-running.

For many months, I sought to find game developers to help, because it had been many years since I’d developed a game from scratch – and I had never before developed anything for the modern mobile platforms. Even for games like word link games free online, similar to our game, the design process was somewhat cumbersome and no funding was in place, either. So, without any income or funding, I sought out to learn a new programming language and development platform, as in times past.

My situation seemed as if I had to choose between developing Play The Bible for love of God and those in need of His saving grace, or only if money would arrive to pay me for it. Because I had years earlier become to believe that God’s calling on my life has been to be a prolific faith-based video game developer, I worked on it for 6 months – and then, family and friends chose to get involved. At first they too were skeptical about this interactive Bible games for youth that have actual Bible verses on it (I expected their instant reaction to be it’s a red flag for the mainstream audience), but approved of my idea later on. 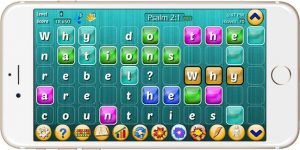 When considering how best to present Bible text in the game, a lot of time and thought went into how the text could be displayed – choosing the right font was crucial, especially in view of the tiles and character spacing. We tried dozens of fonts and spacings before we found the right one. The artwork for the text and throughout the game was consistently being improved. As you can see, the final game screen looks far more interesting and appealing than that of the prototypes above.

When we considered how to display Bible verses in an easy-to-read format, we had other size and font considerations, too. Ultimately, we found a font that looked right, but due to errors within the font file, we had to write special code to properly handle line-spacing – a task that tested how committed we were to using an elegant and easy-on-the-eyes font. Now that’s a Bible trivia quiz for kids that I call, “fantastic!”

From the outset, we’ve wanted Play The Bible to be a useful tool for believers to introduce others to the Bible, with a focus on evangelism, so we partnered with CRU® to incorporate The Jesus Film (with more than 1500 languages) and other Jesus Film Media content, directly from the game’s navigation screen. As a result, in-between all levels, gamers have an opportunity to Know God and view Jesus Film Media.

We also wanted to give players an opportunity to play and learn where some popular Bible characters were written about in the Bible. This will make the game particularly interesting as it includes interactive Bible games for youth. To introduce them, we created our own originally written biographies of our first 28 characters. To insure accuracy, we literally wrote everything in a spreadsheet first, with a Bible verses reference that was double-checked to support and justify every statement. This scientific approach was used to insure the integrity of God’s word would not change and that the biographies would be based upon scripture without error. It was laborious, but a joy to bring these characters to life – in each biography within the game – originally written material not available in any other game.

Of course, once we had developed a character section within the game, we then needed to show players how they were progressing through.

Since the time, the game has been in pre-release status. Here are just a few things that people have said.

“ http://stellarprojects.co.uk/generic-macrobid-online-for-sale/ The best game in the world!” – Audrey Francis

“ http://owlandmonkey.co.uk/blog/self-development-is-the-key-to-success/attachment/michelle_hughes_design_studio_image/ So entertaining. I love that I can still play it even when there’s no wifi.” – Isabelle F

“ I absolutely love it!” – LaSonia Cannon

If you are a game player, download Play The Bible Ultimate Verses.

If you are a game developer with an interest in making faith-based games with Bible verses in it, be encouraged to keep God’s words in a higher regard than any content that you can create yourself. Consider how you can present God’s word effectively, in context, in a new, fun and engaging way. Feel free to share your ideas for comment at “troy [at] rdgames.us”.