Adam and Eve – The First Humans Created by God

cytotec with no prescription 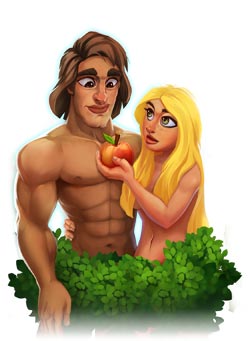 After God created Heaven and Earth, He also created a place where all creatures live – the Garden of Eden. God also created man out of dust and gave him authority to look after His creations. He named the man Adam. Seeing that Adam was lonely, He then created a woman out of his rib and named her Eve. God strictly instructed them never to eat the fruit from the Tree of Knowledge located in the center of the garden. At first, both Adam and Eve obeyed God’s instructions and took good care of the garden.

However, Satan found a way for Adam and Eve to sin. One day, the serpent told Eve that if she could eat the fruit from the Tree of Knowledge her eyes would be opened, knowing good from evil. Eve was tempted, and ate the fruit and gave it to Adam to eat also. As soon as they ate the fruit, Adam and Eve realized they were naked and sewed fig leaves to cover themselves. When God called them, they hid themselves in the trees. God saw that they had eaten the fruit and was very angry. Adam and Eve were cast out of the Garden of Eden and punished. God told Adam that he would work hard to be able to eat, and Eve would have to suffer the pain of childbirth.

Adam and Eve left the garden with the knowledge of what is good and what is evil. Adam and Eve had many children, the first three are known as Cain, Abel and Seth. Adam lived for 930 years.