is Lurasidone sold over the counter 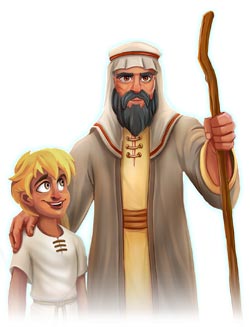 Abraham the Hebrew Patriarch, following the nine descendants of Shem, is considered the first Hebrew. God revealed himself to Abraham, made promises to make of him a “great nation”, and entered into covenant concerning Abraham’s offspring.

Named at birth as Abram, Abraham is the son of Terah, the ninth descendant of Shem. Abraham had two brothers, Nahor, and Haran. Abram was born in Ur (capital of the ancient kingdom of Sumer).

He married Sarai and they lived with his father Terah. From Ur, Abram and his family moved to Haran, about 600 miles to the northwest. There, at the age of 75, he received his calling from God. God said to Abraham the Hebrew Patriarch, “Leave your country, your relatives, and your father’s home, and go to a land that I am going to show you. I will give you many descendants, and they will become many nations. I will bless you and make your name famous, so that you will be a blessing. I will bless those who bless you, but I will curse those who curse you. And through you I will bless all the nations.” (Genesis 12:1-3)

He then left Haran with his wife, Sarai and his nephew Lot, to the land of Canaan. There, God appeared before Abram and promised him a son through his wife, Sarai, who was barren. This promise seemed impossible due to their old age, but because of Abram’s faith, he believed God. However, lack of faith and patience pushed Sarai to give their servant girl, Hagar, to Abram who bore him a son, Ishmael. At the age of 99, God appeared again before Abram and confirmed his promise of the covenant. Therefore, Abram walked blamelessly before God and God renewed His covenant with him. So Abram, (Noble Father), became Abraham the Hebrew Patriarch, (Father of many nations), and Sarai, (Princess), became Sarah, (Mother of Nations). Sarah became pregnant, as God had promised, and bore Abraham a son. Abraham named him Isaac.

God sent them on a long and dramatic journey, giving Abraham instruction and guidance. There were many important events that happened in Abraham’s life, but one in particular tested his faith in God. God commanded Abraham to bring his beloved son Isaac to Mt. Moriah and offer him as a burnt offering to prove his faith. He willingly obeyed the order of God. At the last moment before Abraham sacrificed his son as instructed by God, God commanded him to stop and not to kill Isaac. And instead, gave him a ram for the sacrifice. Abraham’s strong devotion and faith pleased God so much that He richly blessed Abraham. He lived a good long life, married again after Sarah’s death to Keturah, and died at the age of 175.